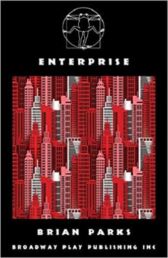 Four business people - Landry, Owens, Sanders, and Weaver - arrive in the morning at their skyscraper office and soon learn that their company is on the brink of collapse

At first upset and panicked at the news, they decide that this can instead be a chance to finally prove themselves

They attempt to come up with a proposal, a new business plan that will impress the company chairman and save both the business and their careers

What follows is an antic all-day, all-night effort, as the four race to complete the proposal by the next morning

A fast-paced, edgy, semi-surreal comedy about business and ambition

"Run Glengarry Glen Ross through a Monty Python spin cycle and you might get Brian Parks's kinetic farce Enterprrise, an absurdist express train of comic corporate-speak

Four ambitious businessmen in a skyscraper - the bespectacled Weaver, the fresh-faced Sanders, the somewhat dim Owens and the experienced Landry - entertain big dreams of impressing the unseen chairman of their imperiled company with a proposal that will send profit margins into the stratosphere ...

The true star is Mr Parks's dialogue: If a joke doesn't hit its mark (and some are simple non sequiturs), another one lands before you have time to notice. Mr Parks - a former theater editor at The Village Voice and an ex-chairman of the Obie Awards - is noted for the fast pace of his work ... his hapless executives may not qualify for a raise, but his Enterprise merits a promotion" ~ Andy Webster, The New York Times