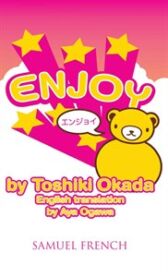 The static lives of several self-obsessed GenX comic book store clerks are thrown out of balance by the presence of a younger female co-worker, who rightly makes them question the meaning of their lives in a shifting socio-economic landscape

Written in the hyper-colloquial style Okada has become famous for, this play is presented for the first time in English in a translation by Japanese American playwright Aya Ogawa, and was met with massive critical praise upon its New York premiere

"Listless characters translate easily to a different culture, the blunt colloquial language elevates this drama into something more daring ... Distinguished by a style that turns inarticulateness into the sort of poetry that rewards close listening. Mr. Okada, with the help of a very deft translation by Aya Ogawa, makes sure that even if it take a while to communicate a thought, a mood of indulgence and despair emerges clearly" ~ The New York Times

"Toshiki Okada's new play deserves the attention of a major theatrical event. Meditations on age, failure, and finance read clearly as existentialism for the reigning recession. Like the best works of the theater of the absurd, Enjoy turns its humility into philosophy" ~ Backstage