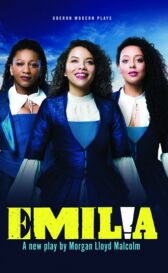 'Men, who forgetting they were born of women, nourished of women, and if they were not of the means of women, they would be quite extinguished out of the world, and a final end of them all; do like vipers deface the wombs wherein they were bred' ~ Emilia Bassano

In 1611 Emilia Bassano penned these words to her 'Vertuous Reader', as part of a volume of radical, feminist and subversive poetry

The rest of Her Story has been erased by History

Commissioned specifically for Shakespeare's Globe, and with an all-female cast, it reveals the life of Emilia: poet, mother and feminist

★★★★ "Malcolm takes an attractively robust approach, mounting conjecture upon conjecture ... a passionately considered manifesto rather than a cautious history lesson ... Not just the best piece in Michelle Terry's inaugural season, this is a landmark moment in the history of Shakespeare Globe" ~ The Independent

★★★★ "The great virtue of Lloyd Malcolm's speculative history lies in its passion and anger: it ends with a blazing address to the audience that is virtually a call to arms... in rescuing Emilia from the shades, it gives her dramatic life and polemical potency" ~ Guardian

★★★★ "Malcolm writes eloquently, at times beautifully, showing Emilia's suffering and brilliance in equal measure. She also uses the context of the Globe masterfully shattering the fourth wall with direct address to bring the audience into the story... an outright feminist triumph and a brilliant call-to-arms, it'll be hard to forget Perkins' closing passage any time soon. Emilia is a rollercoaster production firing on all cylinders and not stopping for a second to apologise" WhatsOnStage

★★★★★ "Morgan's words see each and every woman that came before Emilia, have come since her, and are yet to come ... Emilia is a play that transcends time, and place, to find meaning and relevance in a world far removed from its own" ~ The Stage