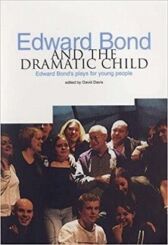 Our future depends on the state of our imaginations, and drama becomes more important as the world changes

Plays young people write, act in and watch are the blueprints of the world they will have to live in

The book will be of interest to everyone working in drama with young people in theatre, schools or community work, and to actors and directors in mainstream theatre

This copy is signed by Edward Bond