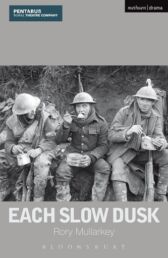 The Private misses the farm

The Captain dreams of painting

The Corporal relishes the fight

And a hundred years later

The Woman seeks to understand

1916 - In the darkness of the French night, three young soldiers - a private, a corporal and a captain - cross no man's land towards the enemy trench

Stealth is key to their survival and so they walk in silence, with nothing to communicate the thoughts in their heads save for the barest of gestures

2014 - A woman goes on a day trip to visit the monuments commemorating the Battle of the Somme at Vimy Ridge and the Loghnagar Crater - the site of a mine explosion that killed over 6,000 - where she encounters remembrance, restaurants and gift shops

Each Slow Dusk is a startling play about action, humanity, and the legacy of war

Immersing you in the reality of conflict through vivid, thrilling detail, it gives you a fresh way of thinking about war - from the past soldiers' perspective to the woman's present-day experience