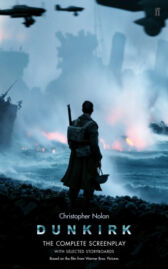 This is the Complete Screenplay with Selected Storyboards

But with Dunkirk, Nolan has gone back into the past and brought to life one of the momentous events of the twentieth-century the evacuation of British troops from Dunkirk

Telling the tale by land, sea, and sky, Dunkirk opens as hundreds of thousands of British and Allied troops are surrounded by enemy forces

Trapped on the beach with their backs to the sea, they face an impossible situation

And now the enemy closes in ...

A must for all film students and film buffs