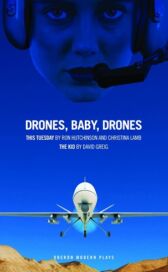 And one vital tale of power, sex and infighting at the top of the Washington establishment

As Barack Obama prepares to leave office, this double bill probes behind the scenes of America's controversial drone wars

And asks what they will mean for our future

A White House security adviser is sleeping with an intern

A Pentagon General is working out in the gym

This Tuesday, in one hour, they will each have a vital decision to make

A missile hits a wedding in Pakistan

Pushing the button was the start

If only it were the end

"Both plays are at their best when they prod at the points where personal ethics, power and public policy intersect. When and how do good intentions slip away? The strength of this double bill is that it refuses to let the British off the hook" ~ The Guardian

'This assemblage is closely akin to the kind of thematic programmes such as Women, Politics and Power or The Great Game about Afghanistan that Nicolas Kent used to present when he ran London's Tricycle Theatre... the underlying sense of an obligation to bear witness as a matter of moral citizenship remains" ~ Financial Times