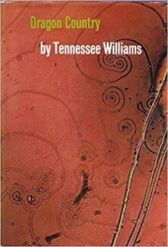 'Dragon Country, the country of pain, is an uninhabitable country which is inhabited' - so Tennesssee Williams expresses the theme of 'endured but unenduring pain' which runs through all of these eight plays published in 1970

In the Bar of a Tokyo Hotel shows an artist worn to nervous ruin by a breakthrough in his painting technique, abandoned and destroyed by his witch of a wife

From the early Sixties we have the two 'Slapstick Tragedies,' The Mutilated in which a once beautiful woman whose breast has been removed is blackmailed by her 'friend' and The Gnadiges Fraulein in which a 'celebrated soubrette' is reduced to battling 'cocaloony birds' for discarded fish on a Florida Key

I Rise in Flame, Cried the Phoenix is based on the death of D H Lawrence, while I Can't Imagine Tomorrow is a paradigm of human inability to share or communicate

Confessional presents the 'regulars' of a California beachfront bar - an aging beautician celebrating her brother's 'death-day', an alcoholic doctor who botches a difficult childbirth, and two men who give us new insight into the unique sadness of the 'gay world'

The Frosted Glass Coffin reveals a group of elderly people in a retirement hotel, dying off one by one in the intense zinc-white light of Miami

Two women, with weight and skin problems, look for fun at a convention in A Perfect Analysis Given by a Parrot