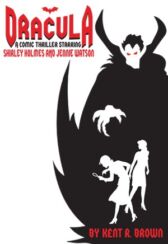 Large Mixed Cast
Having munched their way through most of the population in rural Transylvania, Count Dracula and his loyal band of groupies, the Draculettes, have set their sights on the bright lights of London

But alas, the renowned sleuthing duo Sherlock Holmes and Dr. John Watson are vacationing somewhere in the Belgian Congo and won't return for weeks

So what to do?

Fortunately, Shirley Holmes and Jennie Watson - the resourceful nieces of the famous detectives - prefer to save London from annihilation than study for their upcoming exams!

And trembles at Dracula's magic powers

And is thrilled by a breathtaking race across Europe

With Dracula on his schooner and Jonathan in his carriage, who will be first to arrive on the English coast!

Other characters include the lovely Lucy, who is rapidly falling under Dracula's spell

And Renfield, a fly-eating lunatic who seeks immortality by becoming Dracula's servant

But can our intrepid young heroes vanquish Dracula before he devours all of London?

There are certain to be bites and screams galore

And Vampires that bubble in the sunlight