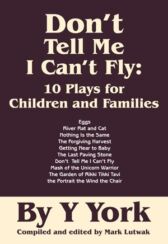 Y York's award-winning plays for young people are noted for their relevance, humor and high critical response and have been produced to popular acclaim for audiences of children and adults throughout the world

This Anthology contains original plays, adaptations from literature and "listening plays" including work based on research and interviews with living people

The 10 (mostly) full-length Plays in this great-value Collection are...

A loose adaptation of Kipling's classic. Nobody dies in this free-flowing, comic brawl!

And when she is threatened with the forever-silence of the ground, she risks the ire of her Pa to share the sound with normal-eared people

Mask of the Unicorn Warrior - M3,F2

Crown Prince Tycho leaves to cure his weakness, by killing a unicorn like his father before him

And then meets Mercurial, who claimed to be a survivor of shipwreck

Their fates intertwine in this tale of love and deception.

The Portrait The Wind The Chair - M1,F2

During the windstorm of the century, Lucy and her sister find themselves marooned alone in Grandma's old house

And a dead Grandma who won't stay in her portrait

Mika musters all of her 9-year-old resources to save Sticky-the-Cow, who she helped deliver while her own mother was on her deathbed.

On the island of O'hau, on December 7th, 1941, four young boys' lives will be changed forever

School has stopped all together, they learn to spot enemy planes and have become wary of their Japanese neighbors

Will outside challenges force endings to friendships?

But when Rat becomes frazzled by Cat's demands, Dale Beaver sees a perfect moment to break up the friendship and take the tree property River Rat owns

A Keystone Kops kind of komedy for kids and their kin

Eggs - From the novel by Jerry Spinelli - M2,F3

Meanwhile Primrose has issues with her own psychic mother

Getting Near to Baby -adapted from the Newbery Honor Book by Audrey Couloumbis - M2,F6

Reeling from the death of their baby sister, 12-year-old Willa Jo Dean and 7-year-old Little Sister Dean, are sent to stay with Aunt Patty so their mom can recover

Inspired by the life and art of Della Wells, this tells of nine-year-old Tonia growing up in a working-class, African-American home in Milwaukee in 1964

Tonia finds her way, the only way possible, by allowing her parents to see her true self with all its flaws, beauty and possibilities