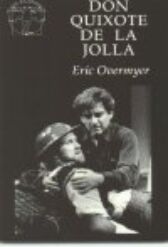 "A cosmically inclined theatrical court jester" Mel Gussow, The New York Times
"A blissfully zany...comedy... it is mainly just a free-wheeling romp that takes off some of the characters, incidents, and ideas in Cervantes' book. It is that form of comedy, known as burlesque or travesty, which achieves its humor by the low and ridiculous transformation of a loftier subject. (Actually, since the original DON QUIXOTE was itself a burlesque of medieval romances, DON QUIXOTE DE LA JOLLA is in effect a travesty of a travesty.) More accurately, DON QUIXOTE DE LA JOLLA is not so much a burlesque of the original book (which few people read anyway) but of the image of the book in the mass mind as fostered by other adaptations, most significantly MAN OF LA MANCHA.... DON QUIXOTE DE LA JOLLA is, then, a headlong, hectic, hilarious rush, a frantic comic phantasmagoria on Quixotic themes, that needs no scholar annotations; it is great good fun." George Weinberg-Harter, Drama-Logue - Originally produced by The La Jolla Playhouse