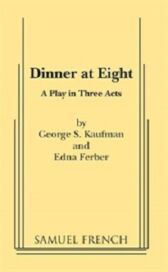 From the society column of the New York Times:

This dinner party turns out to be the most disastrous theatrical banquet since the Scottish play!

Despite her attempts to throw the perfect party, Millie Jordan is confounded by events beyond her considerable control ...

Dan Packard, a business tycoon has just gobbled up her husband's shipping line

Packard's wife, Kitty, is having an affair with Dr. Talbot

Millie's daughter is having an affair with the aging matinee idol Larry Renault, who is suicidal over his career prospects

By the time the butler announces "Dinner is served", a microcosm of Depression society has been thrown together and shaken by the thousand dirty little secrets that connect one person to another, no matter what their class