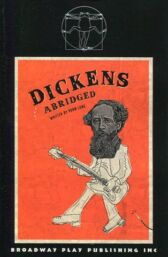 They Did it to Shakespeare - Now it's Dickens!

Having boiled down Shakespeare, Wagner, the History of America, and the History of the Bible, Adam Long from The Reduced Shakespeare Company turns his zany talents to Dickens, roaring out the major novels in frantic time ...

For instance, Bleak House rattles by in about 10 seconds, David Copperfield is only a little longer, and there is a racing version of A Tale of Two Cities, complete with bloodstained guillotine and severed heads!

We're also given peeks into Charles Dickens' life - his obsession with Oliver Twist and how he delighted in giving live performances of Bill Sikes bludgeoning tart-with-a-heart Nancy to death, is given the satirical treatment

And there's a very funny moment when the author, very sick in his bed, has hallucinations of Nancy & Sikes, plus his dog ...