Dialects of the British Isles 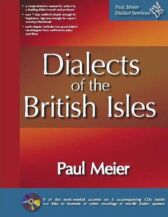 All practice sentences and monologues are in IPA notation, as well as the successful number-keying system

Paul Meier has been teaching British and American dialects, and foreign language accents (French, German, Russian etc) for over 20 years in the USA and his native England, coaching some of the biggest names in movies - Tobey Maguire of Spiderman fame, for example - and over two hundred plays and musicals

His books, booklets and CDs have been developed over a 20-year period and, simply put, they work! Paul Meier's resources are designed for success -

They're easy to follow, producing instant results No prior skills are needed, yet the materials are rigorous enough to challenge the experienced dialect student And they're fun to work with !

Paul Meier is a dialect and dialogue coach and dialect instructor for theatre and film; a voice-over artist with many commercials and audio books to his credit; a theatre professor specializing in voice, speech, dialect and text; and works with clients on accent reduction and English as a Second Language (ESL)

He has taught at some of the most famous theatre schools such as The Royal Academy of Dramatic Art (RADA), The London Academy of Music and Dramatic Art (LAMDA), Webber Douglas, North Carolina School of the Arts and currently at the University of Kansas, where he is Full Professor and Head of Voice in the Theatre and Film Department

He is also founder and director of the International Dialects of English Archive (IDEA), a growing archive of over 500 primary-source dialect recordings of subjects reading and conversing in their native accents and dialects