Detective Sketches and Other Short Plays 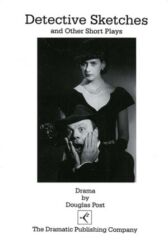 A spoof of the film-noir genre. Alex Diver is the best private investigator in town, according to the sign on his door. He gets tangled in a web of deception and death when the Lady In Green asks him to take a case

A man living in a cool neighborhood full of hipsters realizes he doesn't belong and runs away to the gritty side of town. Unfortunately, he can't stay away for long

Falling Through the Cracks

Somewhere on the Coast of Belize

At Night in the Asylum

"A wonderful parody of every film noir or detective story you ever saw" ~ Carolyn Ayres, Fortuna High School, Fortuna, CA

"What a fabulous play for a high-school festival. Our adjudicator loved the script, and the adults in the audience got every joke. The students were entertained by the fast-paced comedy and the stylish acting" ~ Paula Zentner, Maple Ridge Secondary School, Maple Ridge, British Columbia, Canada