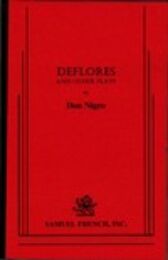 The 7 short plays in this Collection are ...

The old producer, a skeletal, dying gentleman from the old days on Broadway, tries to convince a young playwright not to give up his big chance because he won't let anyone tamper with his script. During his increasingly impassioned diatribe, he relates his checkered and bloody history in the American theatre. This outrageous, moving, sometimes obscene play is weirdly uplifting

Creatures Lurking in the Churchyard - M1

It's 1901 and Inspector John Ruffing is sitting with his gun beside him. His young wife is dead and there are creatures lurking in the darkness: two small red eyes look at him. He has no beliefs. He loves his daughter desperately, but he is suffering horribly. He tries to decide if suicide is a solution or only another chapter in the hideous demonic nightmare his life has become

The DeFlores run a bizarre ragtag traveling carnival that includes Uncle Robespierre, who makes pigs disappear and likes dressing rats in doll cloths, Belladonna, who reads fortunes and dreams of yodeling men in short pants, and King George, who believes the rooks are out to kill him for eating their sister. When the cow dies during a sawing in half trick gone awry, young Bartolomeo borrows a bucket of milk and falls in love with a young lady who just wants her bucket back. Demands for blood vengeance follow ...

In this long one act, Doctor Faustus is bored with life so, as a joke, he conjures up the devil. He is shocked when a devil his own personal Mephistopheles actually appears. She is a young, beautiful, elusive, reserved and melancholy. As they bargain for his soul, Faustus becomes obsessed with her. Their oddly compelling love story forms an unusual and haunting version of the Faust legend

The great Russian writer is going mad and is also constipated in this surreal investigation of artistic creation, sex, noses and other things. He puts a devil puppet on one hand and a gypsy girl puppet on the other and has violent three way arguments with himself. A beautiful drowned maiden appears from under his bed clothing, a giant nose runs out of the closet, and pandemonium ensues. Gogol burns his masterpiece and disappears up a ladder to nowhere

The Irish Girl Kissed in the Rain - F1

A young Irish actress speaks about the fascination she finds in tormenting her lover. When she looks in the mirror, she sees someone else. Escape from what frightens her is impossible; there is something missing inside of her and she doesn't know what it is

Uncle Fritz sits on the verandah of a restaurant in a tropical country, sipping a blood red drink and planning the seduction of his waitress. He speaks about the nature of love, his war memories and the relationship of God to werewolves. He sees the world as a grand opera and his experiments on humans as his own works of art. This is a dark mediation on the nature of evil delivered by an old man who has been to its core and found much satisfaction