Death & Taxes - Hydriotaphia and Other Plays 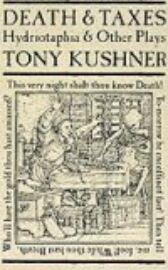 "This is an odd assemblage of plays, for which gathering-together there is no overarching thematic justification. Because several of the plays deal with death, and one of the death-plays deals as well with money, and the last play deals with taxation, we're calling the book Death & Taxes. But all plays, directly or indirectly, are about death and taxes, so this title explains little..." - Tony Kushner

What is clear, is that all of the plays in this new collection by Kushner are poetic masterpieces. An exploration in form and style, from comedy to farce to what can easily be called hip-hop theatre, Kushner makes each style his own, writing with the mind of a great social reformer and the heart of a poet. This collection is proof that his masterwork, Angels in America was just the beginning