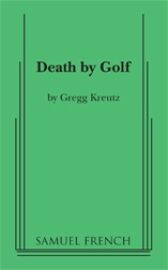 An escaped convict, an anxious bride, a scheming new husband, and a suspicious attorney all convene at Grandpa's house, and it doesn't take long for Grandpa to realize he has to reschedule his golf game!

As the suspense mounts and the violence intensifies, Ashley slips into increasing hysteria, Muriel discovers the murderer's evil agenda, and Grandpa, drawing upon an unsuspected hidden reserve of inner strength, fine-tunes his stroke