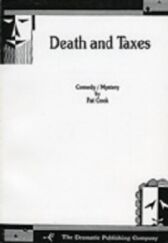 Ever wonder what goes on at a small-town city council meeting?

In Hendricks, they're looking for a murderer. Mayor Kathleen Lyles boldly announces that the meeting will be more like a coroner's jury than the usual round of arguments

Not only was a man murdered, but he was an employee of the IRS

"Somehow I don't feel that bad!" Carl Johansen says, as the sheriff clamps the cuffs on him, making him the prime suspect

Slowly it becomes apparent the entire city council had seen the man, and each of them seems to be hiding something

So who murdered the stranger?

Was it Cora Sedgewick, who was still dizzy at the time from stepping on a rake and being thumped in the face with its handle?

Or newspaper editor King, who's right on the spot to report the facts, if he could only find a pencil?

Or maybe the mayor herself, who was doing her laundry in the back of city hall?

And, as an added bonus, it can be produced as an audience participation mystery where the audience can not only see the scene of the crime but also question the suspects