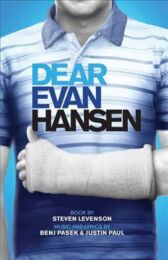 A lie that was never meant to be told

And a life he never dreamed could be his

A chance to belong

"A gorgeous new musical. It should appeal to just about anyone who has ever felt, at some point in life, that he or she was trapped "on the outside looking in," as one lyric has it. Which is just about everybody with a beating heart" ~ New York Times

"Smartly crafted, emotionally open-hearted and ideally cast, it's a new musical that has been embraced by millennials--yet its appeal is universal. Dear Evan Hansen is the best new musical of the year!" ~ Terry Teachout, Wall Street Journal