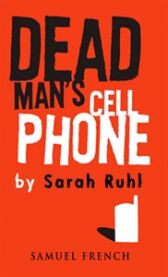 A cell phone rings incessantly in a quiet café

There's a stranger at the next table who has had enough

And a dead man - with a lot of loose ends

It is also the odyssey of a woman forced to confront her own assumptions about morality, redemption, and the need to connect in a technologically obsessed world

"Satire is her oxygen ... In her new oddball comedy Sarah Ruhl is forever vital in her lyrical and biting takes on how we behave" ~ The Washington Post

" ... a beguiling new comedy ... Ms. Ruhl's work blends the mundane and the metaphysical, the blunt and the obscure, the patently bizarre and the bizarrely moving" ~ New York Times