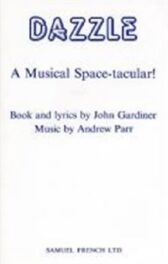 Dazzle, a parody of Star Trek, charts the first voyage of the Star Ship Sunburster One under the control of dashingly handsome (and doesn't he know it) Captain Sam Galatic

Captain Sam, First Officer Speck and an incompetent crew successfully defy Big Olga and her Bolshies on their Red Star satellite when Dazzle Star is kidnapped by an Irish astral pirate

The cosmic score sizzles and the book is packed with lunar tic lyrics and stellar one liners!