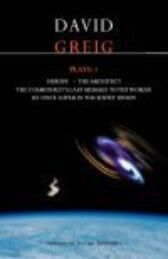 Europe is set in a railway station at an unnamed border town where old and new Europeans weave a tale of love, loss and longing

"Fierce, compassionate, mightily ambitious drama...there is the sharp, analytic intelligence, the crackling inventiveness of a real writer buzzing about this gripping play" ~ Scotsman

The Architect charts the rise and fall of Leo Black, once an idealistic and idolised designer, whose magnificent visions are now crumbling, along with his family, in the light of grubby reality

Lyrical, soulful and darkly funny, The Cosmonaut's Last Message weaves together the stories of a fraught Scottish couple whose TV is on the blink, a Norwegian UN peace negotiator, a young prostitute, a French UFO researcher, a pregnant police woman and two forgotten Cosmonauts who sadly orbit the planet