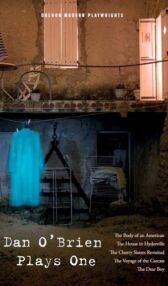 The 5 Plays in the Collection are ...

The Body of an American - M2

Two actors embody more than thirty roles in an exhilarating new form of documentary theatre, against a backdrop of some of the world's most iconic images of war

The House in Hydesville - M2,F5

A provocative comedy with music

Trapped in the ice at the North Pole, only three members of the doomed Carcass crew survive

James Flanagan is not a kind teacher

But is he a good teacher?

He likes to think so

An intimate and stirring character study of a man forced to face his past, his present, and the life he may still yet live

"Dan O'Brien is a playwright-poet who, like a mash-up of Seamus Heaney and Dashiel Hammett, puts the audience in the middle of an unfolding mystery promising both revelation and terror, and delivering an equal measure of both" ~ Robert Schenkkan

"I run to Dan O'Brien plays. With absolute honesty and a poet's language, play by play, Dan is laying bare the human heart-often his own- trying to understand the heart's homelessness. With relentless courage, wonderful black humor and intricate narrative, Dan gets us where we most desire to go - intimacy. Dan's life is proving to be our roadmap home" ~ Bill Cain

"The Body of an American is a marvel in elegant construction. A story full of unexpected twists and turns, it captures the nightmare of war and our attempts to comprehend it via a mass media designed to both condemn and celebrate violence. Dan O'Brien has written a brilliant gem of a play" ~ Eric Bogosian