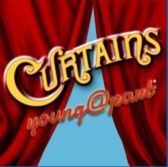 This edition of the Broadway musical has been especially abridged and adapted for Schools and Youth Theatres and includes Script, Score, and a CD of all the Songs

Curtains is set in the brassy, bright, and promising year of 1959

Who just happens to be a musical theatre fan!

Curtains is an hilarious journey for both performers and the audience

The original Broadway production garnered 8 nominations at the 2007 Tony Awards including Best Musical.

Through a series of workshops with industry professionals and children, it's tailor-made for younger actors

Song keys have been changed where needed and songs and scenes are edited for time and content, all the while keeping the spirit of the original Broadway show intact

There are great parts for both girls and boys, and can feature any size ensemble/chorus, who are featured throughout the show

Wide Open Spaces
What Kind of Man?
Show People
In the Same Boat
Thataway!
He Did It
Kansasland
A Tough Act to Follow
Transition to Stage
A Tough Act (Finale)