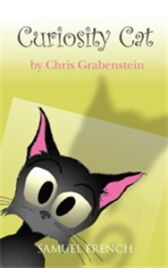 To my way of thinking, there are no such things as strays - only those who have not yet found their homes

It's not only a story about displaced children and homeless cats, it also tells of family and the value of curiosity ...

When their mother becomes very ill, Claire and Charlie are forced to live with their father's Aunt Jenny

When a stray cat called Curiosity wanders into the house and breaks Claire's prized music box, she immediately throws him back out into the streets

But for the cool and curious Cat, being homeless is more of an adventure, not a concern

Soon, the children - aided by Fred the Dog - set out to rescue Curiosity Cat who is now busily trying to help other forlorn felines find homes ...

... provided he can avoid a newly appointed "cat catcher" who vows to "put him to sleep"!

Filled with memorable characters such as Coot, the geriatric cat; Slicker the big city alley cat; Penelope, the pampered Persian Princess; Fred the extremely loyal dog; a nervous and nutty squirrel; a chorus of cute jailbird strays and evil cat-catcher Skeevelberger, the play builds to a funny and touching climax that will leave your audiences laughing and cheering!

COOT CAT - Old cat. Cranky. Hard of hearing. Wears a rumpled cardigan. Could be played by male or female

DUKE - A Tuxedo Cat who goes from shy to dandy. Could be played by male or female

MRS PODGER - The richest woman in town. (Could double as Aunt Ginny)

SKEEVELBERGER - The evil next-door neighbor. 30- or 40-something

STRAY CATS - All sorts. As many as you want to cast

"Curiosity Cat had my daughter rolling in the floor with laughter! Well done!" ~ Jeanne White

"I must say I was blown away by how well-written the play is. My husband said it is like a Disney movie ... so funny for kids and yet really entertaining for adults, too" ~ Amie Headrick Dyer