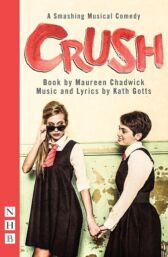 Large Mixed Cast
An outrageously fun musical set in an all-girls school in the Sixties ...

Brimming with catchy tunes and witty lyrics, Crush is a hilarious pastiche of Girls' School stories a blend of Malory Towers and St Trinian's

With jolly hockey sticks and lashings of jolly good fun!

"Crush taps into the subversive undercurrents of its source and brings them to the fore, producing a show that's boldly queer and a little bit crazy, yet with enough innocent exuberance to make it family-friendly, too" ~ British Theatre Guide

Crush was first performed on tour in the UK in 2015