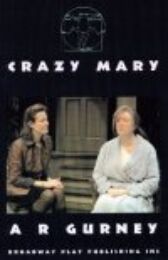 "I'm glad to report that Crazy Mary, Mr Gurney's new portrait of life among the white-bread set, is a highly impressive piece of work, a serious comedy that succeeds in wringing honest laughs out of an awkward subject

In addition to being crazy, Mary is loaded-she inherited all her father's money-and when Lydia, Mary's second cousin once removed, becomes her legal guardian after a death in the family ... well, you figure it out, if you can

Every twist in the plot of Crazy Mary took me by surprise, and none of them disappointed me in the slightest

What impressed me the most about Crazy Mary is that Mr Gurney walks with unerring skill along the knife edge that separates comedy from pathos. In truth, there is nothing remotely funny about Mary's situation, much less her condition, and we laugh at her plight precisely because it is so pitiful

Nor does Mr Gurney let any of his characters off the hook, least of all Lydia, who has spent her own life walking on tiptoe through a a world of tight-lipped propriety in which the most important things are left unsaid" ~ Terry Teachout, The Wall Street Journal