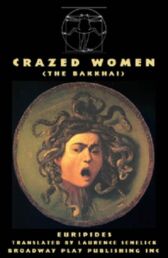 "a tragic parody of a comic theme, which we have in THE BACCHAE [THE BAKKHAI], is really troublesome, and furthermore rare before our time and the great use of it by Samuel Beckett THE BACCHAE makes it plain that some uses of comedy do not diminish tragedy or `relieve' it but indeed augment it" ~ Donald Sutherland

"Sometimes Euripides seems like a religious man, and again, like a charlatan. Of course he was neither. He was a playwright" ~ John Jay Chapman