Cracking Shakespeare - A Hands-on Guide for Actors and Directors VIDEO 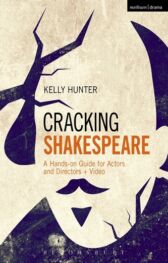 It offers hands-on techniques for drama students, young actors and directors who are intimidated by rehearsing, performing and directing Shakespeare's plays

For some artists approaching Shakespeare, the ability to capture the dynamic movement of thought from mind to mouth, and the paradox of using the formality of verse to express a realistic form of speech, can seem daunting

The result of thirty years of acting, teaching and directing Shakespeare, Kelly Hunter's Cracking Shakespeare is the ideal textbook for actors and directors looking for new ways to approach Shakespeare's plays in a hands-on, down-to-earth style

PART ONE Rhythm, Sound and Structure

Kelly Hunter is an actor, director and educator

She performs, directs and teaches Shakespeare in the UK and USA and has been a regular tutor at the Actors Centre since 2003