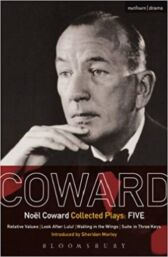 This Collection offers Coward's best work from the last two decades of his life:

Relative Values, a three-act satire of snobbery in all its guises, dealing with the clash of cultures between Hollywood stars and the English aristocracy

Waiting in the Wings, a bravura piece set in a home for retired actresses

And Suite in Three Keys (1965), a trilogy of plays which gave Coward his last roles on stage

The volume is introduced by Sheridan Morley, Coward's first biographer, and includes an extensive chronology of Coward's work

"He is simply a phenomenon, and one that is unlikely to occur ever again in theatre history" ~ Terence Rattigan