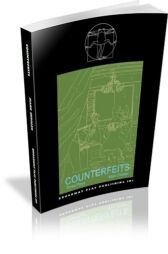 Three wickedly scintillating plays on the artistry and science of duplicity, mendacity, and deception ...

THE ART OF PAINTING - M1

The Art of Painting is the magnum opus of Johannes Vermeer, one of the greatest artists in history, who lived his whole life ruing the life and work of Rembrandt

Or The Art of Painting is the magnum opus of Han van Meegren, one of the greatest art forgers in history who lived his whole life ruing the work of artist Johannes Vermeer

Or The Art of Painting is an act of rue by Jacques van Meegren, son of one of the greatest art forgers in history, who lived his whole life bereft of a father who let him down

And rue, rue, and more rue

About whom he will not be speaking

To write about him, the author enlisted the two 1970s robots, ELIZA and PARRY, who first challenged Turing's test

Together with the author, ELIZA and PARRY have written their tribute to Turing - a dark meditation on whether and in what forms our minds really exist

THE ART OF PAINTING

"If THE ART OF PAINTING were a real art history lecture, it would be a sophomore's dream. The instructor (Mark Chrisler) is cute, and he makes the lives of long-dead white European men entertaining" ~ Anita Gates, The New York Times

" more exciting and intellectually stimulating than anything I remember from college Chrisler builds a sense of unreliability and mystery, and the twists that follow are a refreshing reminder of the vivid worlds a one-man show can create onstage" ~ Marissa Oberlander, Chicago Reader

"A masterful piece of heady writing it fluidly interweaves juicy facts about the 17th-century Dutch painter Jan Vermeer, his famous forger, the art-historical contexts in which their paintings are situated, and riotous references to other famous artists, artworks and Nazis like a dramatic reading of someone's brilliantly constructed master's thesis" ~ Lisa Jo Sagolla, BackStage

"What starts as a witty lecture on history's biggest lies soon morphs into the fascinating story of Chrisler's four-year involvement with a girlfriend who turned out to be a pathological liar. As he relates how he fell for one whopper after another, Chrisler is insightful on self-deception and the way great liars exploit our willingness to believe what we want to believe, even when the truth is staring us in the face. Still more ingenious, Chrisler uses those very qualities against us, carefully parceling out information in a way that leaves us eager to know what happens next even after we begin to doubt the reliability of our narrator an unsettling and irresistible act of storytelling that illustrates the power of a cracking good yarn" ~ Zac Thompson, Chicago Reader

"Mark Chrisler credits ELIZA and PARRY as his coauthors on IMPOSTERS, and their influence is undeniably apparent. ELIZA and PARRY were two 'chatterbots': computer programs, dating from 1966 and 1972, respectively, that could generate primitive forms of conversation. Their idiosyncrasies - including ELIZA's tendency to turn everything into a question and PARRY's preoccupation with Mob involvement in horse racing - gradually invade a dialogue between the tragic British computer genius Alan Turing and an interrogator called Nicolas Bourbaki (which is also the nom de plume of a group of mathematicians who specialized in set theory), raising the question of whether Turing and Bourbaki are human [What emerges is ] a surprisingly vivid sense of anguish as Turing seems to go off program and, well, raise the question of whether he's human" ~ Tony Adler, Chicago Reader