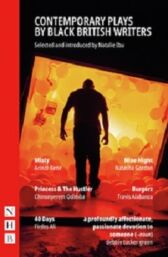 The plays demonstrate a rich range of settings, forms, styles, locations, scales, contents and concerns – and explore themes including politics and protest, grief and colonisation, relationships and gender

They have been seen on stages including the National Theatre, the Royal Court, the Bush and Bristol Old Vic, at the Edinburgh Festival Fringe, in the West End, and on tour of the UK

Selected and introduced by leading theatre director Natalie Ibu, Contemporary Plays by Black British Writers celebrates a multiplicity of stories authored by Black playwrights in the UK over the last decade

Included in this volume -

Misty by Arinzé Kene (Bush Theatre, London, 2018) - 'A powerful meditation on how we tell stories and a raw, beautiful Odyssey through the heart of London' ~ The Arts Desk

Nine Night by Natasha Gordon (National Theatre, London, 2018) - 'An undeniably important piece that both celebrates and gives a voice to the Windrush generation and its descendants living in Britain today' ~ Broadway World

Burgerz by Travis Alabanza (Hackney Showroom, 2018) - 'An angry and intelligent script, underscored with the real pain of exclusion, of being boxed in, of being trapped in a world where sexual and racial violence is prevalent and, too often, tolerated' ~ Guardian

40 Days by Firdos Ali (unperformed) - 'Explores the impact of state violence on Black and brown children, and the consequence of bringing that news into the home on young lives' ~ Natalie Ibu, from her Introduction

a profoundly affectionate, passionate devotion to someone (-noun) by debbie tucker green (Royal Court Theatre, London, 2017) - 'Beautifully dark and recognisable... an insightful observation of how we dissect our relationships, how we talk about talking, and what 'silence' means between lovers' ~ Independent