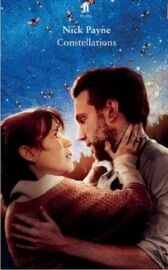 A play about free will and friendship

This spellbinding, romantic journey begins with a simple encounter between a man and a woman

Delving into the infinite possibilities of their relationship

And raising questions about the difference between choice and destiny

"Who knew that higher physics could be so sexy, so accessible-and so emotionally devastating? Nick Payne's gorgeous two-character dramamay be the most sophisticated date play Broadway has seen. [Payne is] a wise and compassionate young playwright ... And though Constellations is a supremely articulate play, it knows that words inevitably fail, that they are never enough to bind two people together forever. Time, it turns out, is a more effective breaker of hearts than human beings, with all their conflicted intentions, can ever be. This story of parallel universes is universal in every sense of the word" ~ The New York Times

"Nick Payne's smart, slushy and pretty superb Constellations [is] about the progress of any ordinary life, which begins with seemingly endless possibilities and then dwindles until death forecloses further choiceI wasn't alone in sniffling into my Playbill" ~ The Guardian (UK)

"Short and sweet and strangely haunting The devilishly clever scribe is not playing games with either his characters or his audience, because with each iteration Roland and Marianne grow closer to one another-and become more important to us. And by the end of the play (has it really been only an hour?), we're fully invested in their lives. All of them" ~ Variety

" a singular astonishment, at once eloquent and mysterious but which nonetheless articulates within its own idiosyncratic idiom something that touches an audience as reala wholly satisfying and complete emotional journey The well-judged dialogue, at once terse and trenchant, finds its own characteristic poetry" ~ The New Yorker "The nearest I've come across in ages to a play that feels heaven-sent" ~ Matt Wolf, The New York Times

" ... gets into your head and under your skin with an immediacy that sometimes tickles and often hurts" ~ Ben Brantley, The New York Times

"Beautiful and brilliant ... Seldom has a play felt so exhilarating" ~ Georgina Brown, Mail on Sunday

"I do know the real thing when I see it. And Nick Payne, a playwright previously unknown to me, is at the beginning of a great career" ~ John Lahr, The New Yorker

" ... if I see a more ingenious, touching and intellectually searching play than Constellations this year, I will count myself very lucky" ~ Charles Spencer, The Daily Telegraph