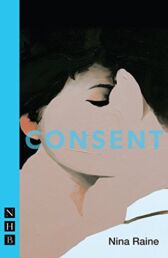 Why is Justice blind?

Or is she blinkered?

At home, their own lives begin to unravel as every version of the truth is challenged

This powerful, painful, funny play, sifts the evidence from every side and puts Justice herself in the dock

★★★★ 'Intricately layered besides its astute observation of the balancing acts involved in marriage, there's plenty of finely tuned comedy. There's also an eagerness to address universal concerns - justice, betrayal, revenge and forgiveness. Yet more than anything else Raine is interested in language, which lies at the heart of every legal case and proves so worryingly slippery" ~ Evening Standard

★★★★ 'Nina Raine's new play is so emotionally bruising that it feels almost glib to describe it as 'a black comedy'. It is a domestic drama about empathy, justice and of course consent that wallops the shit out of you for two-and-a-half hours. It is a play about things we prefer not to talk about; it is like going ten rounds with the elephant in the room, and at the end both of you are crying. There are also some good jokes playwrights should be talking about this stuff, and Raine doesn't hold back' ~ TimeOut

★★★★ 'A thrilling revenge drama powerfully written, and both entertaining and thought-provoking' ~ The Ats Desk

★★★★ "'Funny, pointed and complex Raine's writing crackles with a sharp-tongued and witty energy. Every line is measured and well-balanced, offering a sure-footed and somewhat galling examination of people, with all their horrendous faults on show" ~ WhatsonStage

★★★★ "A thought-provoking piece about the slipperiness of truth, fragility of relationships, and murky unknowability of justice it's heavy stuff, but Raine's script is, thankfully, peppered with laughs'" ~ Broadwayworld

★★★★ 'Exquisitely devastating Raine brings her scalpel to the dissection of the human heart when it comes to love, marriage, relationships, fidelity and revenge, flaying every part of it with clinical precisionthe lacerating dialogue is leavened with generous lashings of humour. Consent may be exhausting, but it's also darkly, overwhelmingly funny, even at its bleakest points" ~ Exuent Magazine