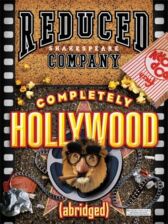 The "Bad Boys of Abridgment" have reduced 197 movies to 100 minutes, condensing every cliché from every movie ever made (plus a few new ones they just made up)

Armed with the theory that every Hollywood movie is just a combination of two old movies, the Reduced Shakespeare Company unleashes such unlikely mash-ups as Jessica Tandy and Robert DeNiro in the feel-good movie of the year Taxi Driving Miss Daisy, Rosie O'Donnell starring in the new musical My Big Fat Fair Lady, and Akira Kurosawa directing Disney's next hit Snow White and the Seven Samurai

It all culminates in the summer's biggest blockbuster with no stars, no budget, and no popcorn - but plenty of laughs!

"One of the greatest, sustained pieces of physical comedy I have ever seen. There are brilliant pieces of comic invention" ~ BBC