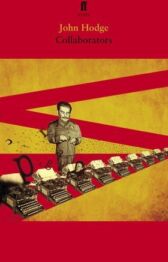 Moscow, 1938 - a dangerous place to have a sense of humour; even more so a sense of freedom

Mikhail Bulgakov, living among dissidents, stalked by secret police, has both

Inspired by historical fact, Collaborators embarks on a surreal journey into the fevered imagination of the writer as he loses himself in a macabre and disturbingly funny relationship with the omnipotent subject of his drama

"Killing my enemies is easy. The challenge is to change the way they think, to control their minds. And I think I controlled yours pretty well. In years to come, I'll be able to say: Bulgakov? Yeah, we even trained him. He gave up. He saw the light. We broke him, we can break anybody. It's man versus monster, Mikhail. And the monster always wins"

Collaborators premiered at the National Theatre, London, in October 2011 and includes an Introduction by the author

"Collaborators is fresh and energetic, with a thick, throbbing vein of grotesque humour" ~ Evening Standard

"Rare and special ... An absurdly fantastic view of Stalin, and it's seriously funny" ~ The Times