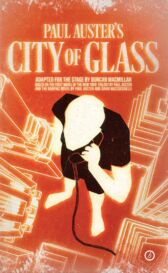 "It was a wrong number that started it"

A dazzlingly original stage adaptation based on the first novel of Paul Auster's seminal The New York Trilogy ...

Quickly and unwittingly he becomes the protagonist in a real-life thriller of his own when he falls under the spell of a strange and seductive woman, who engages him to protect her young husband from his sociopathic father

As the familiar territory of the noir detective genre gives way to something altogether more disturbing and unpredictable, Quinn becomes consumed by his mission

And soon begins to lose his grip on reality

Will he be drawn deeper into the abyss?

Or could the quest provide the purpose and meaning he needs to rebuild his shattered life?