Cincinnati and Other Plays - Monologues for the Theatre 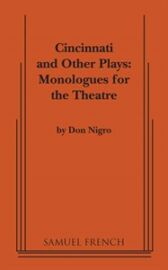 The plays in this Collection are ...

This complex and terrifying play is about a woman who has embraced the illusion of central position she believes she is the center of the universe, that when she moves from one location it is disassembled by evil demons and reassembled elsewhere, and that the universe exists simply to torment her, distract her from the true nature of things, and give her as much pain as possible. Powerful, funny, disturbing and disorienting, this play stretches one actress to the limit of her abilities and takes theatre to the edge of madness

The young widow of Captain Cook, the famous explorer who was murdered on a beach in Hawaii, goes through a trunk of her husband's possessions and relives his life through them. A play about outer and inner investigations into truth, love and betrayal

The Girlhood of Shakespeare's Heroines - F1

Done separately or together, these monologues offer a funny and compelling investigations into how to survive as a minor character ...

Axis Sally finds an unhappily married woman playing Ophelia in a workshop. Her identification with the character's frustration is intensified by her friendship with an old woman playing Lady Macbeth and with a caged animal, Martin Fisher Martin

In How Many Children Had Lady Macbeth? an actress tells of her obsessive quest to play Lady Mac, of the disastrous productions she's starred in, and how being an actress has made her desperate to play her favorite role for the children she will never have

Notes from the Moated Grange finds a minor character from an obscure Shakespearean play awaiting her beloved. She speculates on the nature of obsessive love and the difficulties of playing one's assigned role