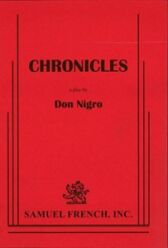 As his daughter Dorothy, who can neither hear nor speak, provides a running commentary which is heard only by the audience, her wild sister Jessie chases their half brother John Rose from room to room and tries to fathom what betrayal is behind her father's refusal to speak to her mother

Uncle David, an eccentric poet, is back from scouring Europe for a lost girl

John Rhys Pendragon, the journalist, broods over his wife's death and the loss of his beloved daughter. Sister Lizzy bustles around trying to feed everybody while enduring her own grief as Sarah, the housekeeper, is being driven mad by the confusion

Trapped in the labyrinth of a darkly cruel history, these people nevertheless love each other and make each other laugh