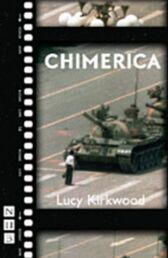 "If we see a better play this year we'll be extremely lucky" ~ Michael Billington, Guardian

A powerful, provocative multi-award winning play about international relations and the shifting balance of power between East and West

As tanks roll through Beijing and soldiers hammer on his hotel door, Joe a young American photo-journalist captures a piece of history

Joe is covering a presidential election, marred by debate over cheap labour and the outsourcing of American jobs to Chinese factories

When a cryptic message is left in a Beijing newspaper, Joe is driven to discover the truth behind the unknown hero he captured on film

So who was this hero?

What happened to him?

And could he still be alive?

A gripping political examination and an engaging personal drama, Chimerica examines the changing fortunes of two countries whose futures will shape the whole world

"A hugely entertaining and at times deeply affecting play performed with rare panache. I cannot recommend it too highly" ~ Telegraph - FIVE STARS

"A tremendously bold piece of writing ... mixes high seriousness and a mastery of complex issues with a fine ear for the comedy of humdrum situations ... a triumph" ~ Evening Standard - FIVE STARS

"A triumph of storytelling first and foremost. It's a gripping, multi-layed and meticulously researched thriller" ~ Time Out FIVE STARS

"An important, far-reaching drama ... Takes a real, momentous historical event and creates an absolutely riveting dramatic speculation from it" ~ The Stage - FIVE STARS