Caught in the Net 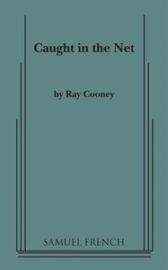 The sequel to Run for Your Wife finds our bigamist taxi-driver, John Smith, still keeping both his families - one in Wimbledon and one in Streatham - happy and blissfully unaware of each other

However, his teenage children - one girl and one boy by each wife - have met on the Internet and are determined to see each other in person, especially as it transpires that they have so much in common - same surname, taxi-driver dad of the same age, etc!

When it dawns on John that they are about to meet, he plunges into a hell-hole of his own making in order to keep them apart

His saviour could be Stanley, his lodger

Stanley is about to go on holiday with his decrepit old father, who turns up thinking he is already at the guest house

"... a sheer joy from beginning to end" ~ Daily Telegraph

"Imagine Watergate, suburban-style ... if you tell one lie in order to cover up a mischief you're forced to tell more and more until you've constructed a bizarre mirage whose one virtue is a lunatic consistency"~ The Times

SEE ORIGINAL
Run for Your Wife