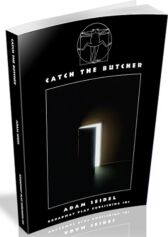 Nancy, a single woman, sits on a park bench before she is chloroformed and kidnapped by Bill, a fastidious serial killer

Awakening in his basement lair, she finds him with accessories familiar to fans of Dexter and the Hostel movies: an industrial apron and a cabinet full of chemicals and surgical instruments

Bill intends to kill her, but she enchants him with her admiration for the poems he composes and leaves with his victims

It turns out she intentionally positioned herself as bait

She cleans house and cooks, while he goes to work (he's a doctor) and returns to read the newspaper, have a martini and be doted on

But Nancy grows bored, and reaches out to their neighbor Joanne, whom she invites over, against Bill's wishes, for supper

Bill, a control freak is not pleased

"Truly hilarious! Catch the Butcher is killer in all senses of the word" ~ Talkin' Broadway

" Adam Seidel's serio-comic Catch the Butcher evokes the dank confines of Hannibal Lecter's cell in The Silence of the Lambs ... an effective blend of romance, absurdism, satire and dread" ~ Andy Webster, The New York Times