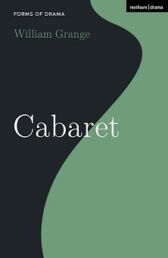 Where did cabaret come from?

What has it got to do with pre-war Berlin, decadent society and Nazis?

How does it turn into media cabaret and the sisterhood of sleaze?

Is cabaret a primary vehicle for exploring the range of sexual practices and alternative sexual identities?

Beginning with its origins in speciality German theatres and the development both of the sheet music industry and disc recordings, Grange tracks the form through into its golden age in the 1920s and beyond

The book's three sections deal first with the emergence of Berlin as the 'German Chicago', where cabaret flourished in the midst of post-war political turmoil

In the book's second and third sections Grange takes the story forward into the post second-world-war world, describing how the form moved outwards from central Europe to move across the whole world, reaching Singapore and Australia, and as it did so settling into the range of forms in which we know it today

Some of these forms became 'media cabaret' looking towards the new media age, the postmodernism that followed on from modernism

To this age, even in its new forms, cabaret brought its old habits of making challenges to assumptions around gender identities and sexual practices

As throughout its whole history, cabaret was a form that provided particular vehicles for female performers

CHAPTER I : Beginnings in France

The Outbreak of War

The Naked Body of Cabaret

The Follies of Foliés and Revues

The National Socialist Reign of Terror

Cabaret on the Airwaves

The Revolt of the '68ers