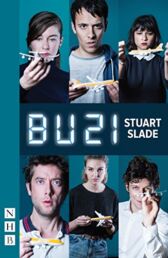 "Every night on the news there's literally always some sort of massively catastrophic end-of-the-world shiz going down: genocide, earthquake, terrorism, school shooting - it's endless, you know? And I always wonder how would I cope, if that happened to me?"

By turns terrifying, inspiring, brutal, heartbreaking and hilarious, BU21 is verbatim theatre from the very near future

★★★★ "'What a daring feat of writing this is hauntingly credible, shudderingly so captures the internal conflict of global terror: the sense that it was somehow deserved, the pull to be part of something, the impulse to laugh and to cry" ~ Whatsonstage.com

★★★★★ "'Strikingly real, shocking and even heartbreaking at times the dialogue is snappy and at some points surprisingly funny despite the tragic subject matter a haunting piece that in the light of current events, will stay with the audience' ~ The Upcoming

"The real star of this show is Stuart Slade's script. It's not just the pace that runs relentlessly across the 90 minutes all-through, but his ear for how people speak, their lexicons and their rhythms. An Alan Bennett for the Millennial Generation is a big label to put on a young playwright, but Slade is building a corpus of work to justify it ... superb work" ~ Broadway World

★★★★ "Few plays in London can claim such immediacy, such grim topicality ... The effect is refreshing, brave in its discussion of Islamic extremism (still an under-played issue in our theatre) ... and at times surprisingly droll" ~ The Telegraph