Brutus and Other Heroines - Playing Shakespeare's Roles for Women 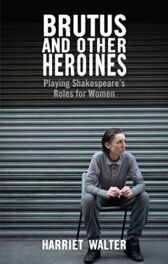 "A part we have played is like a person we once met, grew to know, became intimately enmeshed with and finally moved away from. Some of these characters remain friends, others are like exlovers with whom we no longer have anything in common. All of them bring something out in us that will never go back in the box"'

But where, she asks, does an actress go after playing Cleopatra's magnificent death?

For Walter, the solution was to ignore the dictates of centuries of tradition, and to begin playing the mature male characters

Her Brutus in an allfemale Julius Caesar at the Donmar Warehouse was widely acclaimed, and was soon followed by Henry IV

What, she asks, can an actress bring to these roles?

And is there any fundamental difference in the way they must be played?

In Brutus and Other Heroines, Walter discusses each of these roles both male and female from the inside, explaining the particular choices she made in preparing and performing each character

Her extraordinarily perceptive and intimate accounts illuminate each play as a whole, offering a treasure trove of valuable insights for theatregoers, scholars and anyone interested in how the plays work on stage

Aspiring actors, too, will discover the many possibilities open to them in playing these magnificent roles

But, above all, it is a remarkable account of an acting career unconstrained by tradition or expectations

It concludes with an affectionate rebuke to her beloved Will:

"I cannot imagine a world without you. I just wish you had put more women at the centre of your world/stage I would love you to come back and do some rewrites"