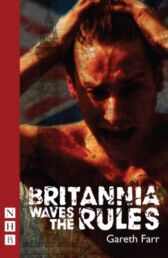 And a society that doesn't know how to cope with them ...

Carl doesn't fit in at home

He doesn't fit in anywhere

And so when he signs up for the army, he sees it as a chance to escape the grim reality of life in his hometown

But the army takes him to Afghanistan

And when he comes home, it's not as a war hero but as a changed man ...

"It would frighten anybody ... A brutally graphic account of a young man's journey from the wet sand of Blackpool to the arid grit of Afghanistan; no writer has tried to pack so much molten fury into a working-class character since Alan Sillitoe" ~ Guardian

" ... a play that oozes testosterone ... it swaggers, bullies, whimpers and rages. It's also often insolently, defiantly funny, and its language, sliding in and out of verse, blends hip-hop rhymes with lyrical poeticism .. A thrilling onslaught of explosive eloquence" ~ The Times

Farr tells his story with unrelenting anger ... He writes with passion and broad humour ... A terrific debut from a first time writer" ~ British Theatre Guild

"Fast furious and action-packed ... Filled with rage ... A scream of protest at the state of the world ... It left the audience cheering" ~ Manchester Evening News