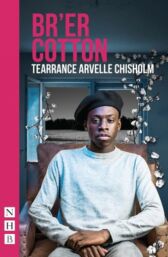 A play that takes a startling and unflinching look at racism in modern America, Br'er Cotton is already the winner of several nominations and awards in the US and UK

It's set in Lynchburg, Virginia, on the former site of a cotton mill

As his anger towards reality grows, he moves further away from his family

Losing himself online, Ruffrino's world sinks around him while he battles to wake up the Zombies

And to prove that Black Lives Matter

By any means necessary

The play was first seen at Kitchen Dog Theatre, Texas, in 2017, and received its UK premiere at Theatre503, London, in March, 2018

★★★★ "Bold, brave and very, very funny an important play, and a great one, that will leave audiences thinking for a long time' ~ The Guardian

★★★★ "An ambitious play [with] fiery dialogue, surging metaphors and questions about progress astute about current battles around race, identity and the thunderous burden of history" ~ Evening Standard

★★★★ "'Valuable very tender storytelling [and a] maelstrom of raging words ensure this play's anger has a base of emotional grounding from which to spring. It's not just a rant, it's righteous, frustrated and targeted anger" ~ The Reviews Hub