Brecht On Film and Radio - HARDBACK 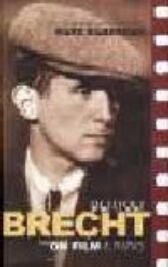 From Weimar Germany to Hollywood to East Berlin, Brecht on Film and Radio gathers together a selection of Bertolt Brecht's own writings on the new film and broadcast media that revolutionised arts and communication in the twentieth century.

. Less familiar, but of profound importance, are his writings on film and radio Marc Silberman's full editorial commentary sets Brecht's ideas in the context of his other work

This volume gathers together, for the first time in English translation, Brecht's own writings on the new film and broadcast technologies that revolutionised arts and communication in the early part of the twentieth century

It also includes all of Brecht's theoretical writing about film, radio, broadcasting and the new media written between 1919 and 1956 as well as all of his important screenplays produced during the 1920s and 1930s

Screenplays written during this time include an early sound-film adaptation of The Threepenny Opera, and a collaboration with Fritz Lang - Hangmen Also Die

A must for students of Brecht and film studies alike