Brecht and the Writer's Workshop - Fatzer and Other Dramatic Projects 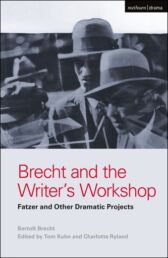 Brecht was never inclined to see any of his plays as completely finished, and this volume collects some of the most important theatrical projects and fragments that were always to remain "works in progress"

Offering an invaluable insight into the writer's working methods and practices, this Collection features the famous Fatzer as well as The Bread Store and Judith of Shimoda, along with other texts that have never before been available in English

Alongside the familiar, 'completed' plays, Brecht worked on many ideas and plans which he never managed to work up even once for print or stage

In pieces like Fleischhacker, Garbe/Büsching and Jacob Trotalong we see how such projects were abandoned or interrupted or became proving grounds for ideas and techniques.

The volume is edited by Tom Kuhn and Charlotte Ryland, with the translation and dramaturgical edition of each play provided by a team of experienced writers, scholars and translators

Introduction, explaining the status and appearance of the various projects and setting them in the context, both of Brecht's literary development and of German social and political history

Fatzer - Downfall of an Egoist (1926-30) - edited and translated by Tom Kuhn: The Downfall of Johann Fatzer

The Bread Store (1929-30) - edited and translated by Marc Silberman

The Judith of Shimoda (1940) - edited and translated by Markus Wessendorf